I think the silhouette is much less frightening than a picture of myself ! 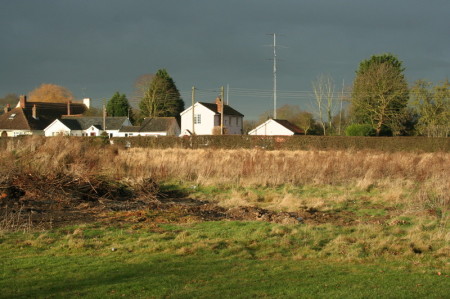 My home, from across the fields.

I was born in the 1950’s in the East of London, but not within the sound of Bow bells. I attended Romford Technical School and left with a few A levels, but I’d distracted myself in the final year by studying for the Radio Amateurs Examination. For four years I went to North East London Polytechnic, and came away with an honours degree in Civil Engineering. Later, with some experience under my belt, I became a member of the Institution of Civil Engineers.

My professional career began with Essex County Council, where I was a highway design engineer. The County Surveyors department (there is no longer such a post) was in Old Court (now a residential mews). Engineers were assisted in their surveying by “chainmen” – these were the guys who held the “silly end” of a measuring tape. Transport was provided in the form of Morris Travellers – you remember the half timbered estate cars?

Later I worked with consultants Atkins and then Mouchel, and my work expanded into Suffolk and onto parts of the M25 and M11.

Ever since I took the RAE, my interest in radio has never wavered. I’ve always been of a competitive nature, and contests and DXing have been at the top of the agenda.