This is a brief look at which bands I am QRV on at present, and why I’ve chosen them.

Crikey, I really must update this stuff more often ! 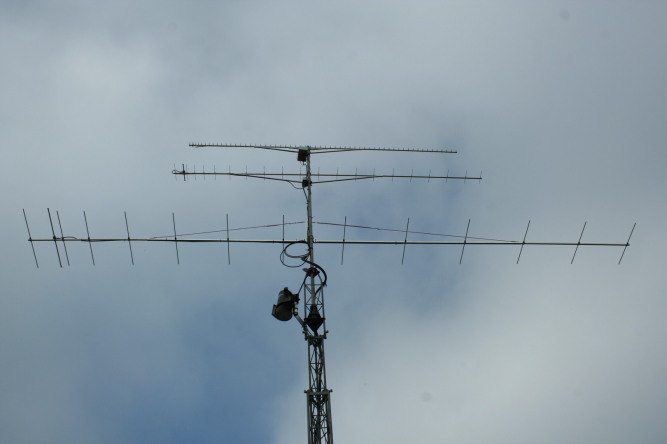 At the top of the mast is a 58 element DJ9BV design yagi for 23cms. I chose this as it's a well proven, if slightly old design, and is not too critical of tolerances in construction, or the effects of rain.

Below that is a YU7EF design for 70cms.

New, at the bottom of the stack  (and just for test purposes) is a G4CQM design for 2m; the CQM14DXL. I'm hoping to make a pair for portable contesting, hence the test. It's chief selling point is a really clean polar diagram, which leads to low noise pick-up. My initial impression is that it does exactly that.

Unusually, I've constructed the CQM14DXL with a tapered square boom, using 30mm box for the central section, then 25mm, and ending with 20mm box for each end part of the boom. In addition, the end sections are a thin wall tube, aiming to keep the weight down.

The VSWR has been checked using a multiple of electrical wavelengths of feeder, cut to length as carefully as I can. This ensures that what I measure is a true representation of what is happening at the driven element. The plot below shows an aerial which is entirely satisfactory for use in the bottom 1 MHz of the 2m band. 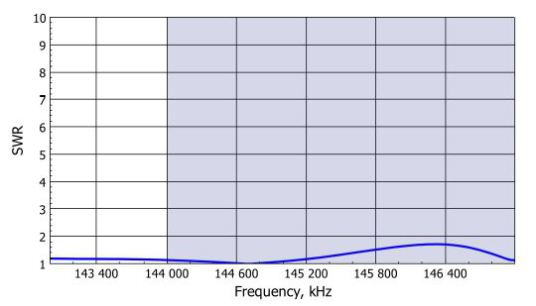 Months have passed since my last posting, but I have not been inactive.

My system last year with stacked yais for 70cms and 23cms worked well but was a little heavy on the mast. I also felt the need for a sharper beam in azimuth, to avoid interference. For these reasons I built three longer single yagis for 2m, 70cms and 23cm.

At the top is a 70 element yagi to a G4CQM design. It's 5m long. More about this yagi will follow separately.

The 70cms yagi is to a YU7EF design and has 21 elements. The sidelobe attenuation is particularly good and I'm finding that is useful.The VSWR is prone to changes in wet weather.

For 2m it's another YU7EF design - 9 elements.This is not to say I was unhappy with the previous G4CQM designs I used - far from it - but it's good to shop around and try some other options. 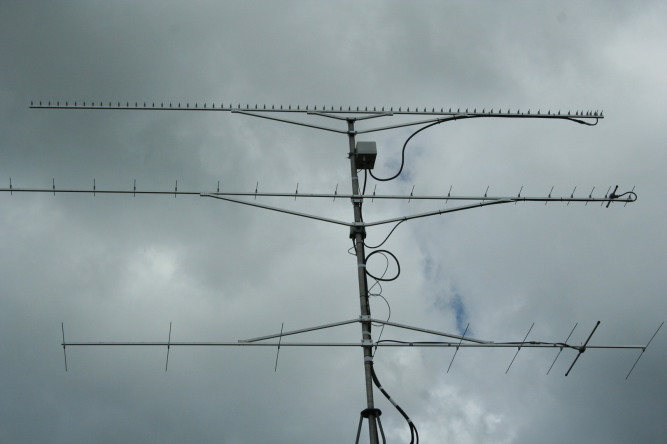 Several changes in the past year, but my web pages have not been updated. Now using a 9 element for 2m, two 18 elements for 70cms and two 60 elements for 23cms, all home constructed to designs by G4CQM. 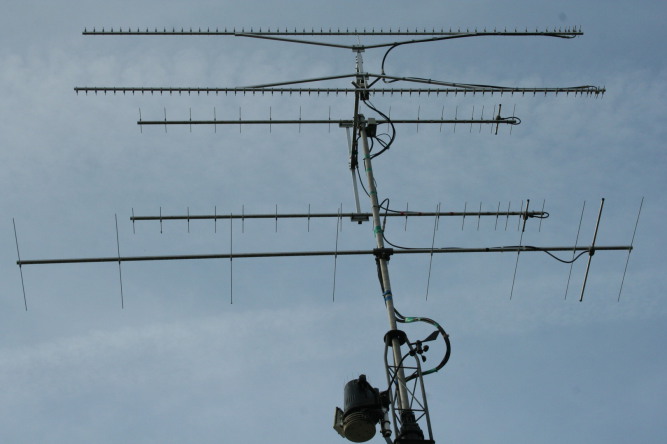 2m has been added to the array - an 8 ele from I0JXX. Just in time for the December UKAC, and the 2m AFS. 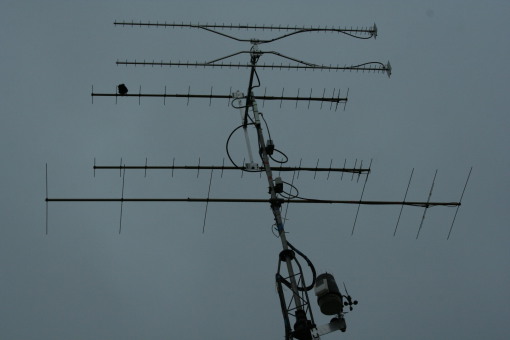 During the summer I enjoyed my experiences on 70cms and instead of tiring of the band I decided to take it a little more seriously. Some money was exchanged with the DX Shop for a Gemini 70 Amplifier, and I changed the single 25 element yagi for a pair of 16 elements, stacked. These have a little more combined gain but more usefully, they are less sharp in azimuth.

At the same time, my experiments with 23cms filters and preamps (see 23cms page) re-introduced me to the band after a long absence. So, on a home-made H frame, shared with 70cms, I’ve installed a pair of Wimo 44 element yagis. Initial impressions of their performance are good, once I had made a minor modification to the boom support (poor drilling accuracy). 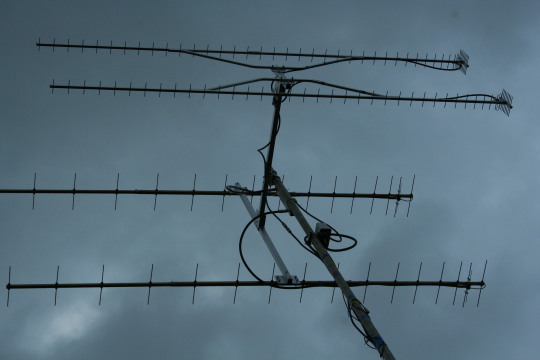 At the time of writing, there is no mast-head preamplifier. This might seem a strange omission, but experience shows me that commercially available models will behave poorly here, just 8km away from the Sudbury digital TV transmitter. So I’ll be making my own preamp incorporating a bandpass filter, and time hasn’t yet allowed me to construct this. I’ve a nice box in mind for the project and I keep laying out the components (two coaxial relays, filter box, preamp module) in different arrangements trying to visualise whether they will all fit.

In the November 2014 23cms UKAC I made over 30 contacts under very average conditions without a pre-amp, so this looks promising and a big incentive to continue on the band.

Something had to give, and currently I’m off the air on 6 and 4m. 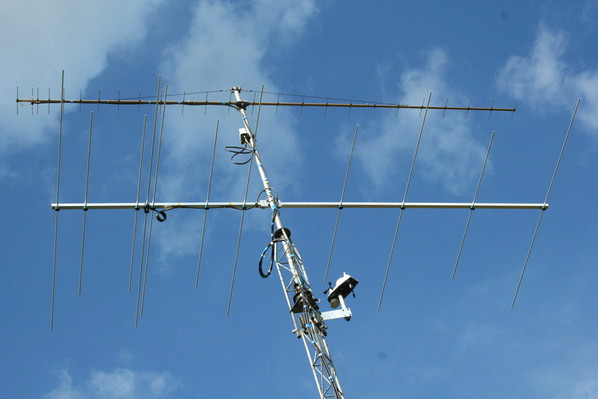 70cms has proved to be an interesting band since I got the aerial up in February and I’ve decided to leave it on the mast for the summer and autumn.

4m, so far, has been rather uninspiring so I decided to build a dual band yagi for 6 and 4m. I chose the model SC6-4-11D from the designs of Justin G0KSC (more info in my blog). From the moment I installed it, propagation has been really poor – yes, it’s my fault ! I will be dabbling in the 6m Trophy to test it out. 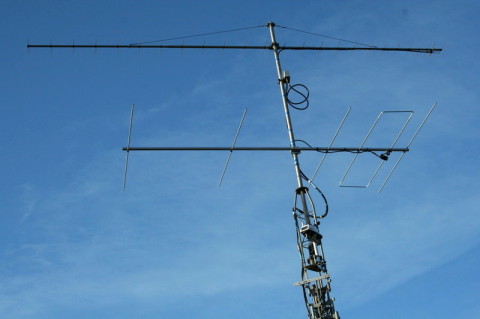 My aim for 2014 is to be QRV consistently on three VHF/UHF bands and these are likely to be 4m, 2m and 70cms. The current weather is not helping me at all to achieve this.

However, prior to last weekends 70cms contest I managed to find enough of a break in the weather to install a 25 ele I0JXX 70cms yagi on the top of the mast. I didn’t even have time to check the match, which turned out to be not quite as good as I hoped, at about 1.4 to 1 SWR. Anyway it worked just fine in the 70cms AFS contest and I got more points than last year when I was using a 21 ele Tonna. Mind you, I wasn’t the only station with a better score, even though conditions seemed poor to average.

In a later weather window I’ve been able to tweak the T-match and the SWR is better; between 1.2 and 1.3 to 1, so that will do nicely. 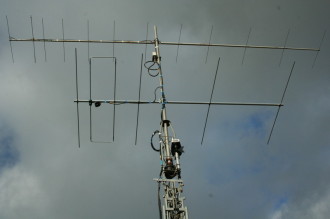 At the end of the Autumn I took down the 6m and 4m beams and temporarily installed a single 2m yagi.

Now, towards the end of December I have put up a new 5 element LFA for 4m below the 2m beam, which remains. The 4m LFA is one of a pair which I built during the summer but didn’t find the time to install. Initially, the SWR was not as good as I would like and I spent part of the day ruling out obvious errors in measurement and construction. Eventually, it turned out that my balun (transferred from and earlier aerial) had suffered from water ingress. 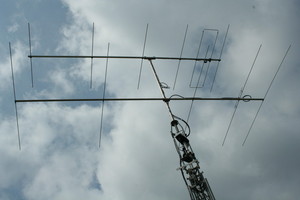 On the main mast, from the end of May, I
have installed a 6m 5 element yagi, and a 6 element LFA for 4m.This is in the
expectation of catching some Sporadic E propagation. On both bands I have been
active for a number of years, so the chance of working new stuff is quite slim,
but it’s worth listening anyway. 4m and 6m will be my primary interest for the
next couple of months. 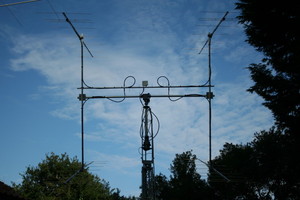 On the second mast is my 2m EME array. This
has been unchanged for several years, being constrained in size by its
surroundings. The aerials are 4 x 8 element yagis from I0JXX. I’ve not used the
EME system for several weeks, and the most notable contact was back in mid
April when I worked the 9G5EME
expedition. 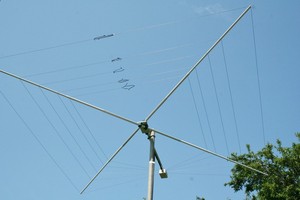 On a pole at only 15ft up is my recently finished
Cobwebb. The early version with plastic tubing developed quite a droop in the warm weather, so it’s been replaced with fibreglass.

Unfortunately it is very close to my EME array and I think there will be a combination of azimuth and elevation where the EME aerials might touch the Cobwebb, so it will have to be moved before I have an accident.﻿