VHF NFD was a combined effort of the Colchester Contest Group and the A1 Contest Group, from our favourite site at Walton. The A1 team provided everything for 144MHz, including operators for the full 24 hours and Colchester provided the rest – 50, 70, 432 and 1296MHz.

The planned “meet at 2pm on Friday” was somewhat scuppered when my car, fully loaded and with trailer, suffered a puncture just a mile from home. Braiswick Tyres provided an efficient on-site service which avoided me unloading.

This 30mm tack caused a bit of a let-down

Meanwhile, A1 group members travelling from as far as Sheffield, made good time. Despite the inauspicious start, all stations were on the air at 3pm on Saturday. This is a particularly fine achievement because Friday night was punctuated by a violet thunderstorm. The snip from “live lightning” shows the storm heading out towards northern Holland in the morning – and they were welcome to it. 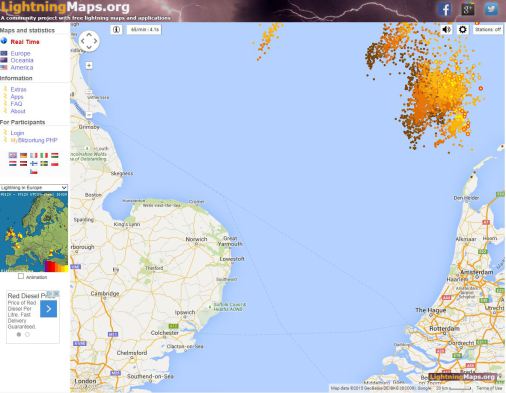 50MHz is often called the Magic Band, but no such luck this year – conditions were awful. 70MHz replaces 50MHz on Sunday morning. Conditions were fair, but for a lot of the time signals were drowned out by static rain. So the two lower bands are, quite frankly, disappointing. 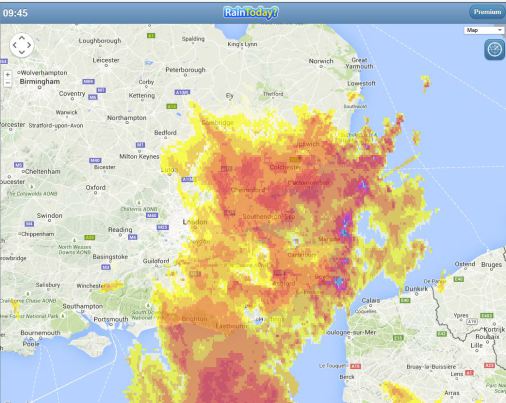 On 144MHz we had over 600 contacts, which is a small but useful improvement on last year, and there was some good DX right across to Poland. The equipment was a stack of four 12 element yagis, supplemented by a further pair. 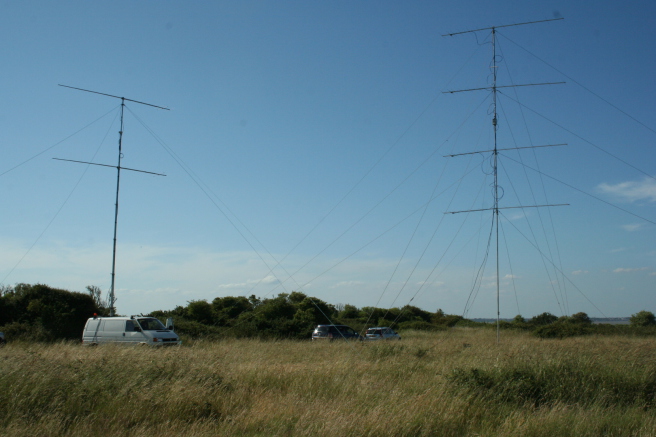 More than 200 contacts were made on 70cms, with DX including OZ and OK. The A1 group had lent us four 28 element yagis for the weekend. Conditions were pretty good early on Sunday morning and the benefit of the coastal site was obvious. 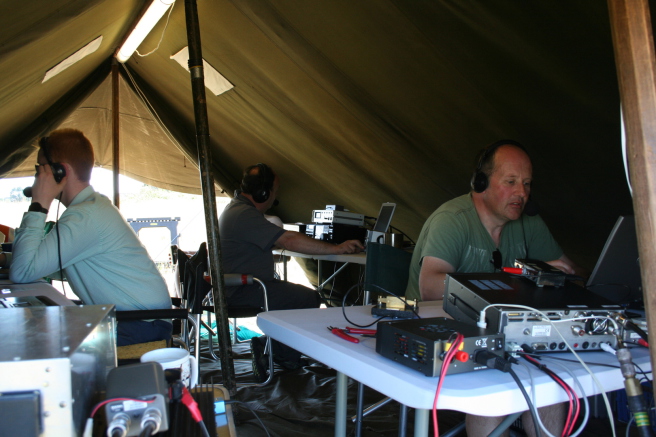 It would be nice to report that we had 100 contacts on 23cms – but it was “only” 98 ! This is an excellent result and is far better than last year, when we had receive problems. 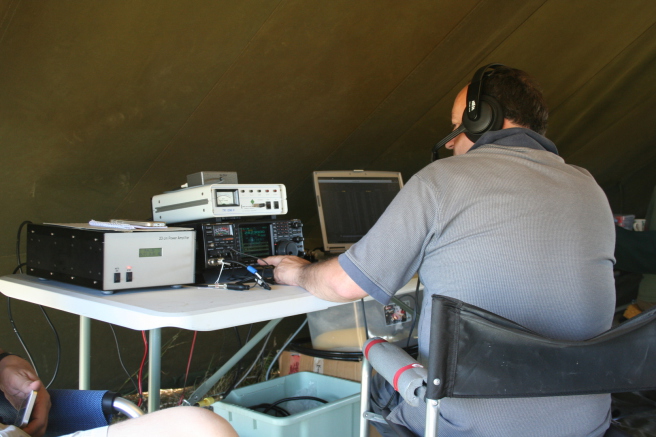 The back side of Phil G0JBA operating the 23cms station

The RSGB has a “claimed scores” page. From this we could see that it was close at the top, and that we were probably not going to be collecting a trophy: There were three well sited, very competent groups in Kent, any one of which could land a score higher than ours………. 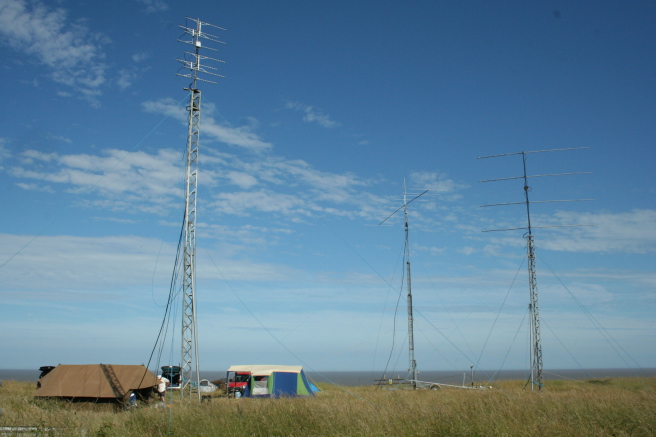 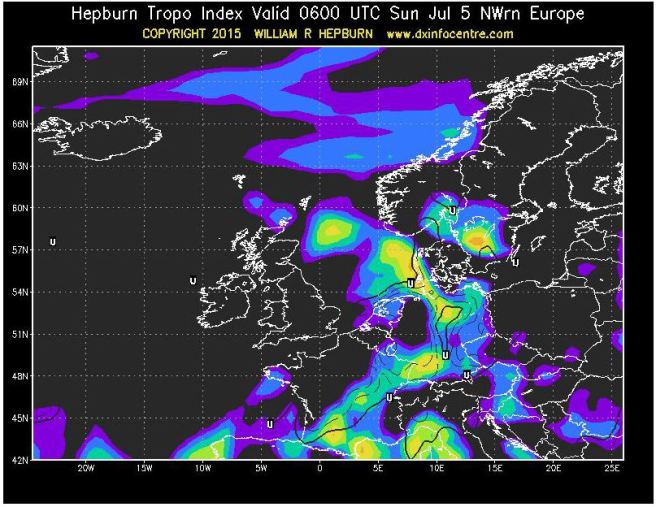 A few days before VHF NFD I dropped a line to the team members which
said “Hepburn is
showing a moderate level of enhancement from SE England across to northern
Germany and Denmark on Saturday.” I guess I was pushing our luck to announce
this prediction, but it turned out to be correct and if anything, a rather
modest prediction.

Back in 2012, Colchester Contest
Group using G0VHF/P had broken with the tradition of winning VHF NFD, and had
entered just a couple of bands for fun. The reason behind this was a lack of
manpower, both for assembly and for operating. So for 2013, the pressure was
off, and we determined to do another fun entry, whilst aiming to achieve a good
placing with again a limited number of ops.

Our Essex
coastal site means that we generally do better on the higher bands, with an
uninterrupted take-off to the continent from our “cliff-top” (all of 75 feet).
Therefore we elected to make a concerted effort on 70cms and 23cms because they
should work well, and also run 4m because we enjoy the band. A late addition,
in case there was too much white noise on the higher frequencies, was a token
2m station. A bonus with the 4m station was that it did not need to be ready
until Sunday morning.

The site is an open space,
managed by the District Council. It’s adjoining an SSSI, and the area is by and
large left to long grass with occasional brambles and gorse. At the moment the
grass is several feet high and this provokes manic beeps from our car reversing
aids – and later lead to the comment that Dave was working the grass on 76GHz.
Allegedly it’s not the only grass he was interested in during the weekend. 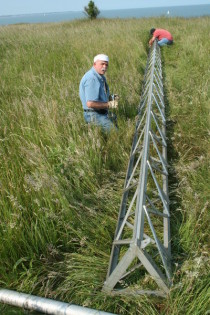 OGY and BMG completing the 50ft mast for 23cms

The rules state that no assembly
of the NFD station can take place more than 24 hours prior to the contest. So
at the allotted hour, G1OGY, 2E0BMG and myself G4ZTR rolled up to begin work of
assembling the hardware. We wanted to be certain that 23cms and 70cms would be
in a position to start on time, so these stations took priority. The ex army
tent was erected, and two Alumasts were constructed from their ten foot
sections. Giving precedence to 23cms, we used 50ft on that band and 30ft on
70cms. 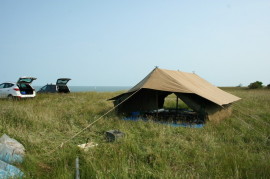 The diesel generator and heavy
mains cable was laid out and an earth point was installed.

Eight 23 element Tonnas were
assembled for 23cms, together with a mast-head pre-amp. Sadly, this did not
pre-amp all the time, but more on that later.

The 50ft mast was roped up, a
falling derrick arranged, and the mast was pulled up by a car and pulley
system. Once the mast was made approximately upright and safe, it was time for
two of us to retreat – Bill to go abroad on holiday, and myself to get some
sleep and another car-load of equipment. This left quite a lot to do on
Saturday, but we felt that we were sufficiently advanced to meet our target
with 23cms and 70cms. 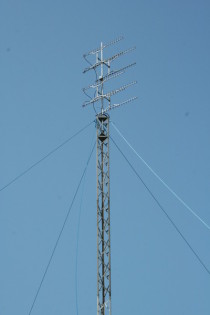 Last of all the site was made
tidy and safe. We occupy public open space and there are numerous requirements
in the risk assessment although most are just plain common sense.

Work continued on Saturday
morning with the four 21 element Tonnas for 70cms (in a vertical stack),
populating the tent with transceivers, amplifiers, power supplies, logging
laptops, lighting and eventually commissioning the set-up on 23 and 70cms.

As an aside, people sometimes ask
me why we don’t use yagis from I0JXX for our outings – after all, my business
is the UK
importer. The simple fact is that we are using aerials that we have had for
quite some time, and they still work. If they wear out or we happen to
accidently lower the mast far too quickly (if you get my drift), then would be
a good time to change.

On Saturday the team comprised
G1OGY, G0JJG, G0JBA and G0DVJ plus myself. Also for his first outing on VHF NFD
we were pleased to welcome M6EIO. 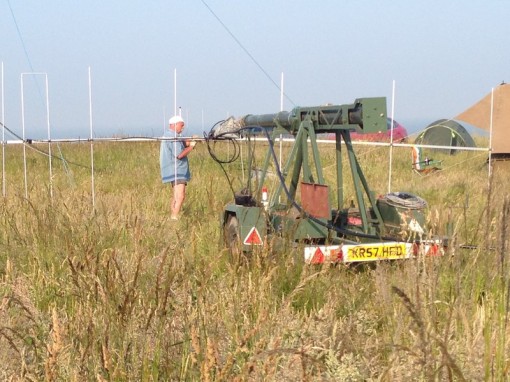 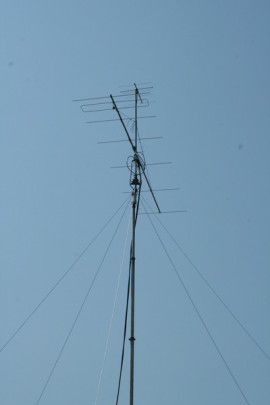 7 element LFA for 4m and, looking very closely, a 5 element yagi for 2m

We started on time on 23 and
70cms. Not only that, but conditions seemed “up” and OZ appeared in the log on
both bands within a few minutes. There seemed a good possibility that Mr
Hepburns predictions would be spot on. There was no time to sit back and relax,
and those of us who were not behind the microphone took the opportunity to put
together the 4m aerial and mast. But all was not well; ‘OGY was wandering
around the mast and I could tell that something was afoot. Indeed that was the
problem – a stabiliser foot for the trailer mast was missing, presumed still on
the farm where we store the mast. Eventually we put together a bodge to get us
up and running, but it was an awkward moment as there is a lot of pressure on
those feet until the mast is guyed.

A late addition to our metalwork
in the sky was a small 2m beam, all five elements of it, fed from a barefoot
Icom transceiver. We installed this as a means to work people on 2m and then
shift them up band by band if we could, and also to keep people occupied if the
UHF bands got too quiet. As it turned out it was quite fun to work stations
over 1000km away on “that little thing up there”. I will quietly gloss over the
fact that I had managed to leave the aerial behind and had to make yet another
trip ohm …………..

Operation on 23cms was
significantly hampered by radar interference from the east and north-east. It
was very strong indeed and I thought some respite had come at around 6pm when
the signals dropped a little. Sadly the truth soon emerged that our 23cms
masthead preamplifier had decided it no longer wanted to take part in the
contest. On reviewing matters later, it seems that our sequencing was not as it
should have been. This was the only real “issue” during the contest.

I tell a lie, another issue was a
lack of chairs despite our best made plans. I spent a little while on the 4m
station towards the end of the contest, and can assure readers that sitting
perched on a small stepladder while sending CW is less than ideal ! 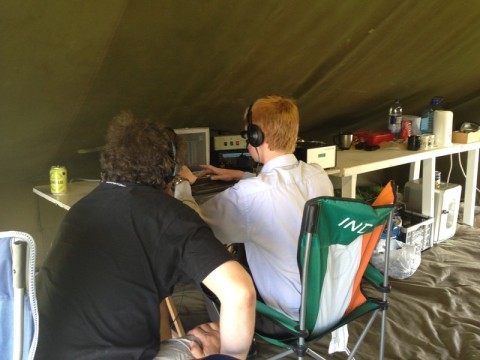 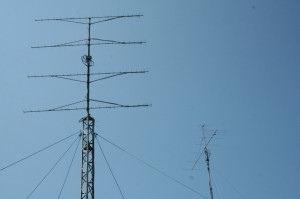 The stack of yagis for 70cms

A few facts and figures, band by
band:-

2m: Our last-minute-just-for-fun
station produced a best DX of 1130km, running around 100w into a 5 element
h/brew yagi.

23cms: We managed over 100 QSO’s
on this band which reflects good conditions to the east and north-east and in a
more limited fashion, to the south. Best DX was over 1000km to JO77 square. The
transceiver was (you might be ahead of me ….) an FT-847, LT-23 transverter and
solid state amplifier from DB6NT. The preamplifier only worked for the first
few hours and will not get paid for the remaining hours on site.

These results are preliminary and
have not been “idiot checked”.

All the equipment for four bands
was in one tent and it was a bit noisy at times. Inevitably, someone getting a
bit excited with the DX on, say, 70cms, will also be heard modulating the 23cms
microphone. There’s also a problem of keeping harmonics and spurious emissions
at bearable levels. To this end, the 2m station was equipped with a W6PQL low
pass filter, and the 70cms station ran through a coaxial low pass filter. Both
of these were largely successful. We also employed a significant height
difference between 70cms and 23cms.

Packing up after the contest took
5 hours. It began with all of us working quickly and efficiently, dropping first
4m and then 23cms. As time went on, we got somewhat slower, and people had to
leave to make (in some cases quite long) journeys home. Nothing got broken and
as far as I can tell, nothing got lost during packing up. I’d assumed that by
8pm, the rush home from the Essex coast would have
been over, but I was wrong, probably because this was by far the best weather
this year. We joined a long and slow queue where the Clacton
traffic joins that from Frinton and Walton, and soon I started a quite long, home-made
and entirely free flowing diversion.

My thanks to all the team at
G0VHF/P for putting up the equipment and for putting up with me, and for
everyone that we worked during the weekend. VHF NFD 2013 will go down as one
of the most memorable for many years.