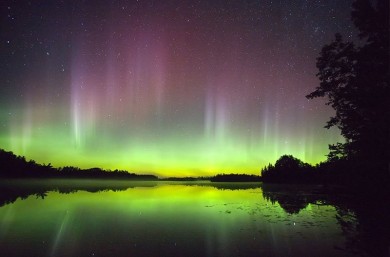 Contacts can occasionally be made on VHF by reflecting signals off the Aurora Borealis or “Northern Lights”. Unlike the predictability of meteor scatter or EME, aurora is a natural phenomenon which can potentially occur at almost any time. However, history tells us that activity is more likely to take place between around 1400 to 2000GMT, and the most likely months for activity are February, April, July and October. In addition, once an aurora has been observed, there is a 27 day cycle until the same point on the sun passes directly opposite the earth.

Contacts using the aurora can take place on the 50, 70 and 144MHz bands, and much less frequently on the 432MHz amateur band. The distances between stations vary between just 10’s of kilometres up to around 1800km. Contacts over 2000km are quite unusual.

The direct path is not used for contacts, instead both stations need to beam at the aurora. This is not a tightly defined location, and by varying beam headings one can make contacts with different areas. Often, beaming at the eastern fringes of the aurora will produce the longer distance contacts to the east from the UK.

Signal strengths vary considerably, and a “good” aurora will produce contacts for quite modest stations (say 100w to a 9 element yagi). Stations in the north of the UK have a distinct advantage being generally closer to most auroras.

If you have never heard the ghostly distortion which is imparted on auroral signals on VHF, you are in for a surprise ! Sometimes the distortion is so great that only CW will get through. Auroral signal reports usually carry the suffix A, such as 57A, although the readability 5 is sometimes debatable. Digital communications fare very poorly in aurora.