Aircraft Reflection is a useful way of working long distances on 70cms and higher frequencies when no tropospheric enhancement exists. Unlike aurora or sporadic E, this form of propagation relies on man made objects for success, and the path of aircraft is largely predictable and available in (almost) real-time from the internet. Maximum range appears to be around 800km.

Successful contacts are dependent on a few simple requirements and the most important aspects are:-

Sources of information for aircraft location include:-

Much more expansive notes about aircraft reflections can be found on GM4CXM's web pages.

The time available for making a contact is quite short, typically around 1 minute, so don’t hang about. That’s just right for a CW contest QSO. The plot below shows the reception of GB3ANG via Aircraft Reflection at a distance of some 570km on 432MHz. There was no signal on the direct tropospheric path. 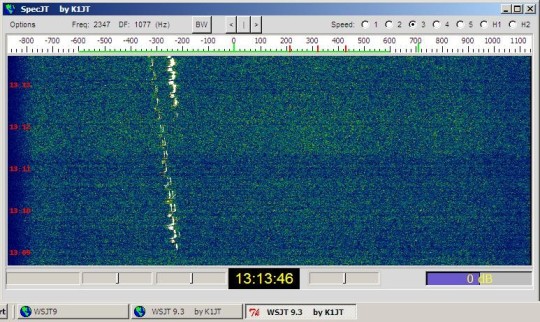 In March 2013 some new software became available, called “Airscout”. The most recent version is 1.0.0.0, available in January 2014. It combines the facility of observing aircraft tracks across Europe with a terrain profile along a path defined by the user. It then highlights the aircraft that are most likely to be useful in providing reflections. One of the best bits about this software is that the user gets quite a lot of advance warning so there is time to seek and set-up skeds.

The user will need to download the software and enter a few parameters such as ones home location. The download url is www.airscout.eu.

Two examples are shown below. The first path is up the east coast of England, from G4ZTR to GM4AFF. The path length is some 600km which is ideal for enhancement by aircraft reflection. An aircraft appears in purple on the map and as a purple dot on the section below – this aircraft has potential !

The second plot is a much more local one, showing how this software has uses outside aircraft reflection. The lowest part of the screen shows a path profile between two local stations, and indicates it is far from line of sight. This can be very useful for looking at contact possibilities on the higher frequencies.

In both cases the optional use has been made of the SRTM3 earth profile database. It’s quite a large download – at present my database is around 3GB. 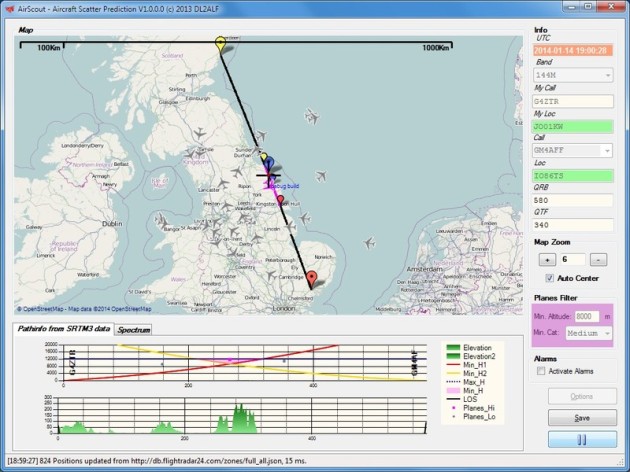 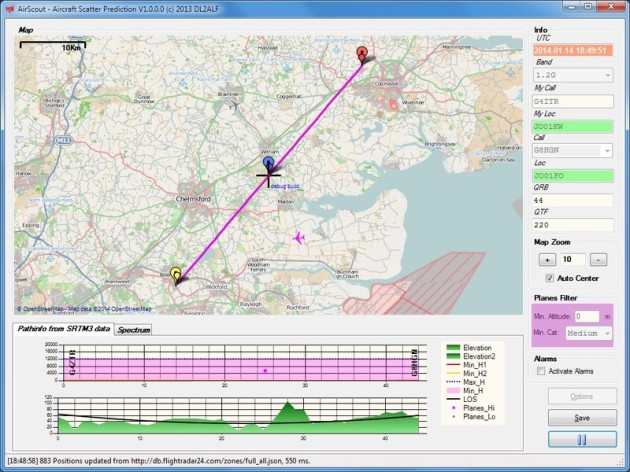