Joe Taylor, K1JT, has been working hard recently on some new weak signal software for HF and LF frequencies. At the time of writing, the programme is called WSJT-X v0.8 r3118. With my part completed CobWebb in the air (at all of 15ft up) it seemed like a good idea to try it out.

Installation of WSJT-X on a Win7 laptop went smoothly and for users already familiar with other programes from K1JT, such as WSJT9, operation is quite intuitive. Yesterday I answered a couple of CQ calls from Russian stations. I started calling then with low power, but in both cases I did not get “seen” by them until I turned things up a bit to 10w.

This morning I decided it was my turn to call CQ. So with 10w to a CobWeb at 15ft I did the “falling off my chair” bit, when the second call was answered by ZL3LF. The rest, as they say, is history. (You’ll need to ignore the CQ calls from an EA station on the screen dump – I am still learning how to drive it). 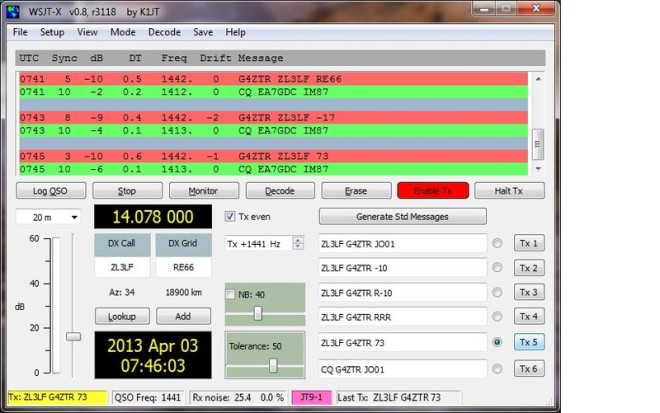