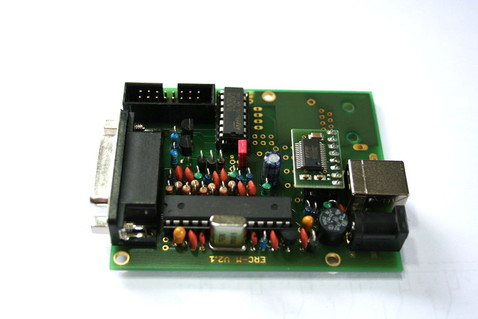 Over the 2012 Christmas period I assembled a small kit called Easy
Rotor. It had arrived nice and quickly from Germany despite the pre-festive
rush. The Easy rotor board sits between a computer and a rotator, providing keyboard
or software control of rotator direction.

The instructions
are extensive and in all but a few places the translation from German is well
done. Illustrations are copious and there is no doubt about placement of any of
the components. The board is quite densely packed, but there are no fiddly
surface mount components. The setting up, and separate control programmes are
provided on a CD, and I’m pleased to say that everything worked first time.

It was quite a
novelty to point at a compass bearing with a mouse and watch the rotator follow
my request. It’s my intention to use Easy Rotor with my 2m EME system, so that
setting the correct bearing will be one less thing to remember.

I wanted to
follow this interface construction with automation of EME azimuth and elevation
control by software. This seems to be one of the few things that K1JT’s
programme does not do.

There are quite
a few software offerings, some of which are free, but after a hopeless few
hours trying to get to grips with the satellite tracking options in Ham Radio
DeLuxe, I chose to purchase PST Rotator. The free trial interfaced happily with
my Yaesu G-1000DXC azimuth rotator in just a few minutes, via Easy Rotor, so it
was all looking good.

My elevation
rotator is a Spid REAL. Initially I thought that this too was working well, and
it needs no interface, but after a while I realised that occasionally it was
missing commands from the software, particularly the “park” command. Codrut,
YO3DMU who writes PST Rotator has been quick to respond with help and this
included a session of remote control so that he could observe the problem at
first-hand. It was an interesting experience to see my rotators moving around
in response to commands from 1500km away.

The problem is
almost sorted out, but there are a few combinations of rotator refresh rate and
park commands which still cause problems and the issue is on Codruts “to-do”
list. To be fair, I can live with this. In the interim I just need to remember
to check that it really is parked correctly.

It’s interesting
how solving one problem can sometimes bring another one to light: It became
evident that a 360 degree turn of my rotator wasn’t really 360 degrees. It’s
probably nothing more that a correction to the pre-set pot on the controller
which is needed, but checking it accurately when the rotator is in the
Versatower was a little tricky.